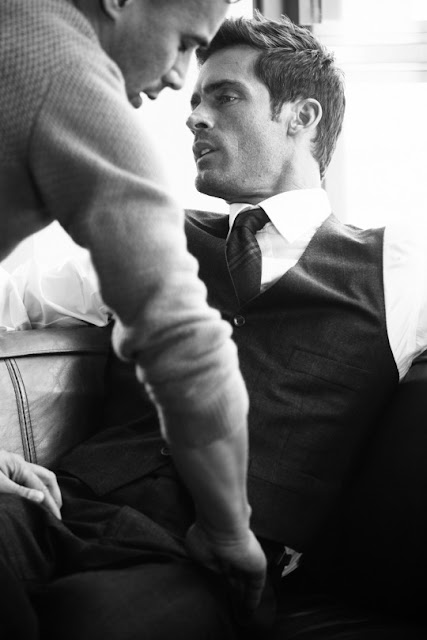 Mark, the director turns his attention to me, a frown on his face. “For fuck sake, will you sort out his trousers? People are tweating about how badly his clothes fit today.”

I keep my expression blank as I nod before walking towards the set on the other side of the cameras. I’ll never understand what Charles’ clothes or the way they fit him have to do with his abilities as a presenter, commentator, and interviewer but I do know what’s expected of me.

Charles is discussing the next guest on his show with one of the assistants when I reach him and he doesn’t acknowledge me.

“What do you mean I can’t ask him about his past? What’s the point in having him on if I can’t touch the one aspect of his life that’s actually interesting?” The irritation in his voice is obvious.

I bend forward and pull at his trousers, trying to figure out how to get them to smooth out, appear tighter, and stay in that position. My hand brushes his crotch and I still, waiting for a reaction.

Charles continues to rand to the studio staff behind me, talking loudly over my shoulder and completely ignoring my hand. Intrigued I tense my fingers, squeezing his cock in the process. It’s impossible to miss the fact that he’s hardening under my touch.

I grin. The thought may be evil but I think it would work just fine. I appear to have stumbled on the solution to our wardrobe problem.

I study Charles from the corner of my eye, making sure not to turn my head. He’s still in full flow, ranting about his upcoming interview. I admire that in him. His face betrays nothing.

The assistant’s warning reminds me that I have a job to do and very little time to execute it. I would love to open his fly and feel his heated flesh against the palm of my hand but limit myself to stroking his now clearly visible cock through the soft material of his trousers.

I grin when I hear his loud intake of breath and turn to look at him. His lips are parted and the tip of his tongue pokes through for a moment, teasing me. My revenge is swift and efficient; a few strokes and squeezes of my hand later his dick is hard, straining his trousers.

“One minute. All non essential staff must now leave the stage.”

I nod in the direction of his microphone before raising an eyebrow at him. Almost imperceptibly, he shakes his head. I straighten and stare into Charles’ eyes, making sure I have his full attention. “You better make sure that stays hard, boy.” I mouth the words almost soundlessly but Charles hears me and lowers his gaze.

I walk back, past the cameras, and seek out Mark. “Does that work for you?”

He studies the screen in front of him, showing Charles in all his glory, and shakes his head.

“Well, they sure fit better now, but will it last?”

I shrug. “That’s what the next commercial break is for.”

He chuckles before shouting: action!

More stories based on the same image can be found in the Monday Flash Fics Group on Facebook. Why don’t you join us there?
Posted by Helena Stone at 11:33 4 comments: 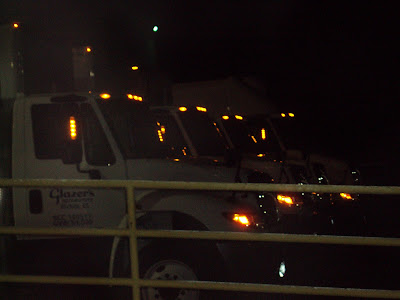 “Keep walking.” His voice is gruff and the grip of his hand on my shoulder tightens, making me wince.

Again I consider resisting. I’ve heard the advice. I know I’m in far more danger if I allow him to move me to a location of his choosing. But I remember his hand on my throat as I tried to fight him off when he first caught me. I can still feel his fingers pressing into my flesh and I have no doubt I’ll discover bruises next time I see myself in a mirror.

He got me after I stepped off the bus. I still don’t understand where he came from. I checked the street before I got off—I always do—and it was empty. But within seconds of the bus pulling away, he had his arm around my throat, pulling me back against his body.

That’s when I fought; kicking back, trying to stamp on his toes. I screamed and cursed and resisted until he suffocated me. Now my hands are bound behind my back and I’m gagged, helpless as he pushes me towards whatever awaits me.

The darkness surrounding us is almost complete except for the dim source of light we’re walking towards. I squint, trying to figure out what I’m looking at. What are those lights? Are those houses? No, they’re….

Shit! I know this place. Those are pickup trucks. For the first time since he captured me panic consumes me.

My silent scream goes unheard as he picks me up as if I weigh nothing and throws me on the bed of a truck. Jumping in after me, he lands on top of me, pinning me down with his weight before I realise what’s just happened. He covers my eyes before I can see his face.

I lie on my back, my hands squashed beneath me. He’s fast, I’ll give him that. While I try to find a position that doesn’t kill the circulation in my hands, he opens my trousers, pulls them and my shoes off in one fluent move before turning me over again. I’m on my knees, ass in the air and my forehead pressed into a surprisingly soft blanket on the truck bed.

I bite into the gag as he spreads my cheeks and enters me. He’s merciless, riding me for his own pleasure with no thought for my discomfort or pain, never mind pleasure. I take, because all I can do is accept what’s being given. He fucks me harder, faster.

Seconds after his orgasm he pulls out, and moments later he’s taken the gag from my mouth, the blindfold from my eyes, and the cuffs from my wrists.

I smile up at Max as I put my clothes back on and in order, making sure my rock hard cock is more or less comfortable in the confines of my underwear.

I’m so lucky to have him.

I turn my head to take another look at the pickup truck as we walk away. ‘Glazers’.

“But really,” I shake my head. “In my father’s forecourt”?

“I thought it added a certain ‘je ne sais pas’.” Max’s grin is evil and I shudder while I imagine what he might come up with next.

It’s been a while since I last wrote a flash and I hope this one will be the start of more regular postings again. More stories based on the same image—suggested by Jeff Baker—can be found in the Monday Flash Fics group on Facebook. Enjoy!
Posted by Helena Stone at 12:00 2 comments: