It has been a while. In fact, it has been too long, but at last I can announce the release of a new romance. Feast your eyes on Picture Perfect. 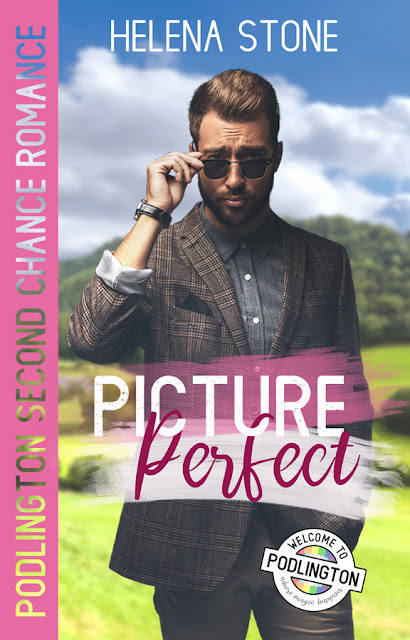 The last thing Cameron Porter expects when he checks in to Podlington House is to come face to face with reminders of the three-week fling he had eight years ago with a young photographer named Eli. But there the enticing image is, hanging over his bed, and that is just one of many coincidences to bring back memories of the man he foolishly refused to stay in touch with.

Eli Comerford stumbles on Podlington House by accident while on a break from his successful career in America. The sudden images of Cameron, his first real lover and the man he never managed to completely forget are disconcerting though.

When they discover they’re staying in the same place, the attraction is as strong as ever, but so are the obstacles between them and a relationship. Eli is still located in the US and Cameron in England. Are they embarking on a second holiday fling or can Podlington work its magic and grant them a picture perfect future…together?

Welcome to Podlington! The fictional English village where magic happens and dreams come true. This LGBTQ+ Second Chance story is part of the Podlington Village Romance series and can be read as a standalone novel. Picture Perfect features a happy-go-lucky photographer, a stuffy academic, a myriad of coincidences, and a guaranteed happy ending.

The Podlington Village Romances series is written in British English and includes at least one non-binary character. Therefore they/them is sometimes correctly used as a singular pronoun.

The pond, although its size meant it could easily be called a small artificial lake, was even more stunning up close than it had been from a distance. Big islands of water lilies floated in various spots, pink and white flowers blooming from the large green leaves. Other sections were plant-ree, the sunlight sparkling on the surface, creating a magical atmosphere.

Cameron walked up to the edge of the water, not stopping until his toes were mere inches away from getting wet. Eli couldn’t stop himself. He pulled the strap of his camera over his head and placed his Canon on a table a few feet away. He crept up behind Cameron and grabbed him by the biceps, making a forward motion as if he was trying to push him in.

Flinging up both arms, Cameron reacted so suddenly and violently he dislodged Eli’s grip and tumbled forward, falling into the water with his hands outstretched to catch himself.

Rooted to the spot and not sure what had just happened, Eli was torn between laughing and making a run for it.

When Cameron lifted his head from the water, sputtering, laughter won. The sight was hilarious, even if Cameron didn’t seem to appreciate it. The indignation in Cameron’s eyes, combined with his glasses sitting crooked on his nose and his usually meticulously groomed hair falling over his forehead, was too much for Eli’s powers of restraint.

“Very funny,” Cameron growled. “What did you do that for?”

Eli did his best to curtail his laughter, but it still took him several moments before he calmed down enough to answer the question. “I’m sorry. I…” A few chuckles escaped Eli before he got himself under control again. “I didn’t mean for you to end up in the water. I just wanted to startle you.”

“Consider me startled,” Cameron grumbled. He raised himself until he knelt in the water and held out his hand. “Here, help me out, will you?”

Eli didn’t think about it twice and wrapped his fingers around Cameron’s wrist. It wasn’t until he felt the sharp pull and found himself tumbling towards the water that he realised he should have seen this turn of events coming.

“There. See how you like it.” Cameron half grinned, half glared at him.

Picture Perfect takes place in Podlington, a picturesque village in Somerset, England, and is part of a collaboration between Alex Jane, H J Perry, Riza Curtis, and Me. You can take a look at all four books here:

Posted by Helena Stone at 16:08 No comments: