Monday Flash Fics: In the Dark 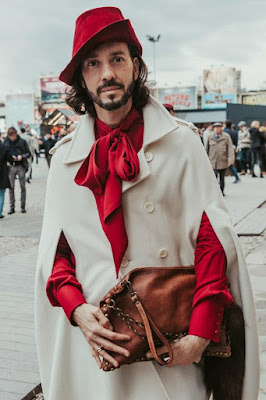 The door had been left unlocked, just as I they’d told me it would be. The hallway behind it was narrow and dark. Squinting my eyes, I searched in vain for a light switch. I suppressed a curse; I hated being in the dark.

Moving slowly, I made my way to the staircase I could vaguely make out in front of me, and carefully climbed towards the top floor. My orders had been clear and I’d followed them to a T. This was the last part of my journey, even if I wasn’t entirely sure what I would encounter at the end of it. I knew what I hoped to find though.

It was even darker, when I reached the top, but I could see there was only one door on the small landing. Disturbingly, no light shone from the gap between the door and the threshold, but I knew what I had to do, so I knocked. Once.

The voice was deep, somewhat hoarse, and not completely unfamiliar. My heartbeat, already accelerated after the climb, picked up more speed as I grabbed the handle and pushed it down.

If possible, the interior of the room was more devoid of light than the hall and staircase had been, and I hesitated.

“What are you waiting for? Was there any part of your instructions you didn’t understand?” The voice came from somewhere straight ahead of me. “Come in and close the door.”

Still I waited, wondering whether whatever might come next would be worth the risk.

I couldn’t ignore the command in that voice and obeyed.

“That’s more like it.” His voice — because I was now sure it belonged to a man — had lost some of the aggressive note it had held before.

“Tell me about your journey here.”

I swallowed. I didn’t want to talk about what I’d experienced as a long walk of shame. But I’d come that far, giving up then would have been stupid.

“It was horrific,” I confessed. “People pointed at me, laughed and jeered.” My mouth was dry, and I swallowed hard before continuing. “Little kids followed me, shouting insults, asking me what I was supposed to be, and …”

“And what?” He sounded almost kind now.

“A little girl, about four years old, burst out crying. She asked her mother why Little Red Riding Hood had a beard.”

“But you came anyway. You didn’t turn around and go back.”

It wasn’t a question so I didn’t react.

“I’m proud of you.” Affection had slipped into his voice.

Suddenly a light came on and I blinked, momentarily blinded. Then I saw him, sitting in a big armchair, dressed all in black with his long hair flowing to his broad shoulders, and his smile almost feral.

“Well done, Red. Now come here.” He pointed to the floor space next to his feet.

I closed this distance, knelt, and relished the moment when he pulled me close, until my head rested against his knee.

My heart soared. After hoping he would notice me for over six months, he’d at last accepted me.

“And for me,” he continued, “you’ll learn to love making a show of yourself. Before too long you’ll cherish the dark. For me you’ll overcome all your fears and boundaries.”

Today he brought me to the promenade and took this photo. He made me wear a coat this time. I didn’t want to put it on. Because I couldn’t be prouder of being Little Red for my Master Wolf.

I wasn't going to write a story for this picture and then I not only changed my mind, but also went way over the 500 word target. Just as well the Monday Flash Fics group members don't take that rule too seriously.

Talking about the group, more stories based on this image can be found here: Flash Enjoy!
Posted by Helena Stone at 21:31 No comments:

Monday Flash Fics: Through the Keyhole 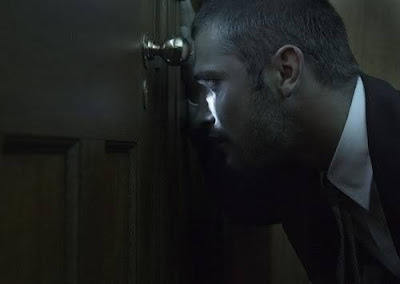 Not for the first time I ask myself how on earth I ended up in this, potentially very embarrassing, situation. I don’t do shit like this. I don’t peek through keyholes. I don’t spy on others.

Of course, if all of that were true, I wouldn’t be here right now, watching these two men as they engage in what has to rank among the sweetest sexual exchanges I have ever seen.

I wonder how long I’ve been crouching here. Far too long, if the pinching feeling in my lower back is anything to go by. Still, no amount of discomfort can make me take my eyes off the spectacle on the other side of the door.

I was here, shortly after I heard the door slam closed, as if one of them used the other to push it to. I’ve watched them as they kissed and undressed each other, caressing each other’s bodies with an on reference bordering amount of attention for every single inch of naked skin.

Their first kiss made me hard. By the time they’d positioned themselves on the bed, sucking each other’s cock, my arousal had turned painful. The urge to open my trousers and take myself in hand has been close to overwhelming, but I resist. I’m in a hallway. Being caught spying on them would be bad enough without me also jacking off.

I’m not sure but I think it’s the darker of the two men who moans the words. They’re fucking now, slow and easy, as if they have all the time in the world. I lose myself in the arse of the one I’ve nicknamed Blondie, moving up and down as he rides both of them to the heights of ecstasy.

A few frantic moments later they climax … at the same time … as if instructed to do so.

“I’ll get something to clean us up.” The blond man’s words are muffled since his mouth is pressed to his partner’s neck. He gets up and disappears from sight, heading, I assume, to the bathroom.

I should leave now. The action has obviously reached its end and the longer I stay, the bigger the chance I’ll be caught. And yet, I can’t take my eyes off the beautiful man on the bed as he slowly trails a finger through the, probably drying, mess on his belly before putting it in his mouth and moaning softly as he sucks it clean.

I rest my head against the door, closing my eyes for a moment as the ‘if only’ scenarios rush through my mind. Next thing I know, my support disappears and find myself on my knees, staring up into the eyes of Blondie.

“Are you okay, Sir?” He tries to hide it but there’s no mistaking that expression for anything but a smirk.

“So much for you giving us a night of freedom.” The voice coming from the bed is all too obviously trying not to laugh at me.

I slowly raise myself to my feet as I ponder the truth in his words. It had seemed like a wonderful idea once I'd figured out how attracted my two subs are to each other. I figured it would be good for them to have a night of passion without me calling the shots. Everything I’ve just seen tells me it was the right decision to make. And yet…

As Blondie, also known as Pascal, drops to his knees and frees my throbbing cock from its confides before swallowing it whole, I decide to make sure this won’t be the last time I give them this freedom. Until then …

I re-establish my position as their Dom the moment I shoot my load down Pascal’s throat.

It has been way too long since I wrote flash fiction and I can’t begin to tell you how delighted I am to have written something this week. I fully intend to resume regular postings but … Best laid plans being what they are, whether or not I’ll succeed, remains to be seen.

Please visit the Monday Flash Fics group on Facebook for more stories inspired by this picture.

Posted by Helena Stone at 18:30 No comments:

Going Back To My Roots

What better date than the first of January to start a new adventure?

Back in March 2015  — OMG, that’s almost three years ago —  my first novel was published by Totally Bound Publishing. 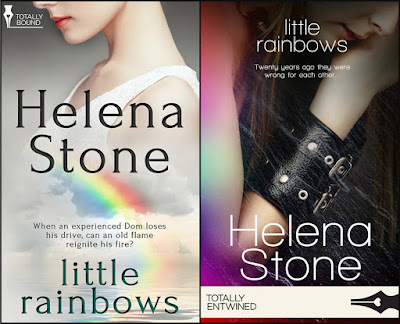 Unlike my subsequent titles, Little Rainbows was an MF romance.

When an experienced Dom loses his drive, can an old flame reignite his fire?

When Jason and Heather first meet they are young and sure they are wrong for each other. As a result they spend a summer admiring each other from a safe distance.
Twenty years later Heather is coming out of mourning, having lost her husband and Dom eighteen months earlier. Jason, now the owner of an exclusive sex resort on the west coast of Ireland, struggles with the loss of his desire to dominate.

Overcoming the issues between them isn’t the only obstacle Jason and Heather face. In the background lurks a threat both to Heather’s independence and Jason’s livelihood.

One of the secondary couples in this book has been begging me to tell their full story almost from the start, and one or two readers have since informed me that they’d love to know more about Hector and Amber. It took me a while, but I have, at long last, managed to commit their story to paper (or should that be screen?).

It is with pride and about a million butterflies doing summersaults in my stomach that I can now announce the launch of All or Nothing, a full-length prequel to Little Rainbows, the first Blowhole novel as published by and available from Totally Bound Publishing.

All or Nothing takes place about three years before the events in Little Rainbows. I think and hope that I’ve written the story in such a way that it can be read and enjoyed whether or not you’re familiar with the earlier publication.

If she’s not good enough to have all of him, she’d rather have none.

If Hector wants to hang on to the woman who has taken over his heart, he’ll have to reassess his preconceived notions.


From today, All or Nothing will be published in instalments on Wattpad where it can be read for free. My intention is to stick to a weekly posting schedule.

The introduction and first chapter can be found here: All or Nothing.

I can’t wait to hear what you think about Amber and Hector’s story.

Ps: For those who worry that I’ve now abandoned the MM genre, allow me to reassure you. Later in 2018 I’ll be publishing a new gay romance and while I am working on yet another book in the Blowhole Series, that story will once again feature two men as the main characters.
Posted by Helena Stone at 12:10 No comments: