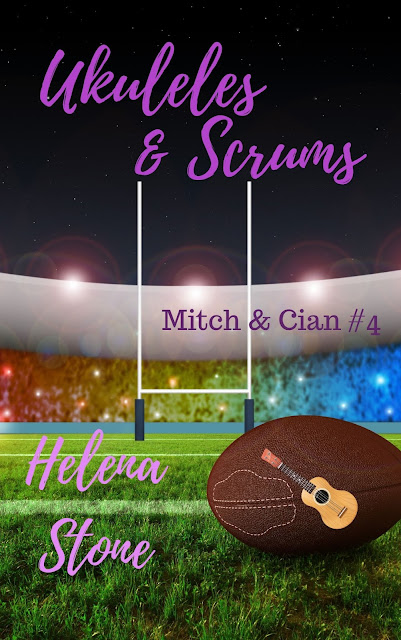 Available to read with Kindle Unlimited

Also available as a paperback

Falling in love is easy. Building a life together takes more work.

Nine months after getting together, Mitch and Cian are studying in Dublin and sharing an apartment. For both, this is a dream come true and even boring household chores become fun when they do them side by side.

Tensions arise after Cian joins an inclusive rugby club and Mitch a ukulele orchestra. Insecurities, jealousy, and lack of relationship-experience soon lead to resentment, and each struggles to balance romance with their individual interests. After Cian and Mitch accept separate invitations to Halloween parties, hoping the other will accompany them, their doubts grow.

Will All Hallows’ Eve drive a wedge between them or could there be another miracle in the making?

Ukuleles and Scrums is the fourth novella in the Mitch & Cian series. While it could, possibly, be read as a stand-alone story, the reader will enjoy it more if they read A Miracle in the Library, Lessons in Love, and Pride of Place first.

Happy Release Day to Ukuleles & Scrums. When I wrote A Miracle in the Library last year, I thought I'd written a charming Christmas story and that would be the end of it. I had no idea it would be the start of a year-long journey. .

Little did I know Mitch and Cian had different plans. They weren't happy they only got to share a few kisses and told me that it was only fair to tell more of their story, if only because it would mean they'd get to know each other better - in all sorts of ways. 😉 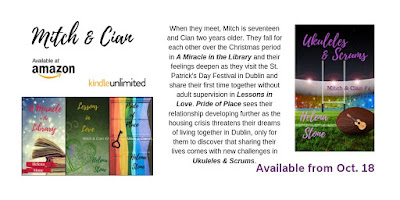 So, here I am, almost a year later, bringing you the fourth installment of their journey together. And boy has it been a journey. These two have done some growing up over the past ten months, as this, not entirely safe for work, excerpt clearly shows.

If you're curious about the earlier titles, you can find them in the following places: 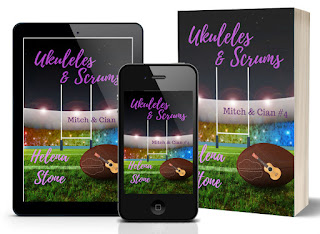 Posted by Helena Stone at 19:30 No comments: