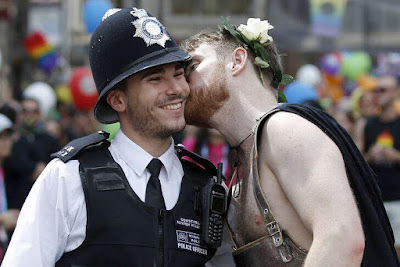 “If it isn’t Donovan Grady. Fancy meeting you here.”

Donovan – Donny to his friends – spun around and stared at the bobby who’d said the words. Shit, shit, shit. He hadn’t paid the policemen standing along the parade route any attention at all. He certainly hadn’t expected one of them to know him; one of them to be the man he’d bullied relentlessly when they’d both been teenagers. Who would have thought wimpy and shy Edward McCabe would grow up to join the ranks?

Of course, if Donovan was honest, he had to admit Edward hadn’t just been wimpy and shy; he’d also been cute as hell and that had first confused and later infuriated Donovan.

“Edward, this is unexpected. I guess we’re both a long way from home.” Donovan wasn’t quite sure how to talk to the man whose school years he’d turned into hell. Mind you, his hadn’t been easy either. Trying to hide who you truly were while harassing those who were brave enough to come out, had proven quite exhausting.

Edward smiled the same sweet smile Donovan remembered from the past – the smile he’d worn regardless of the shit Donovan and his mates had thrown at him. The smile Donovan had loved to see as much as he’d hated it. It had made Donovan’s heart beat faster while his mates had seen it as proof that Edward had a crush on him and they’d teased him relentlessly. Which of course had only made Donovan crueler to Edward.

“I never thought I’d find you in the middle of a pride parade. What a difference a few years make.” The smile never left Edward’s face.

If their positions had been reversed Donovan would have used this meeting as an opportunity to rub Edward’s former hypocrisy in his face. But Edward had been a forgiving soul in the past and, if appearances were anything to go by, that hadn’t changed.

“Yes...” Donovan felt the blush as it crept up his neck and cheeks, “I guess some of us were slower to admit the truth about ourselves than others.”

For the first time since Edward had said his name, Donovan broke out of his personal bubble of memories and became once again aware of the people streaming by them, all part of the large and very colourful Pride festival in London. It was a far cry from the small Northern town they’d both grown up in. The town Donovan never visited anymore because his parents refused to accept the truth about their son.

Thinking about his parents made Donovan’s mind up for him. He’d nothing to lose anymore. His friends had been right, he did have a crush on this man when they were both sixteen and, looking at Edward’s smiling face now, he had to admit, the attraction hadn’t diminished over the years.

“Want to meet for a drink when you’re off? I owe you an explanation.”

When Edward opened his mouth to interrupt him, Donovan rushed on. “Or at least an apology. Let me buy you a pint.”

“Sure. You don’t owe me anything but I’d like to go for a drink later.” Edward’s sweet smile stretched into a grin.

Donovan couldn’t resist. He bent forward and placed a soft and long overdue kiss on Edward’s cheek. “I’ll see you later so.”

This story was a little bit too long at 560 words, but I just didn't want to cut it any further. As always, other flashes can be found in the Monday Flash Fics Facebook group. That is also where we will be posting the picture for next week's story later today (Monday July 6).
Posted by Helena Stone at 11:30