With all the excitement as a result of having two novellas available for free over the past few days, I more or less forgot to also promote the release of the second story in the Valentine’s Love series. But, given that today actually is Valentine’s Day, it is probably the perfect occasion to tell you all about Valentine’s Surprise. So, stay tuned for the cover, the blurb, and an exclusive, not available anywhere else, excerpt. 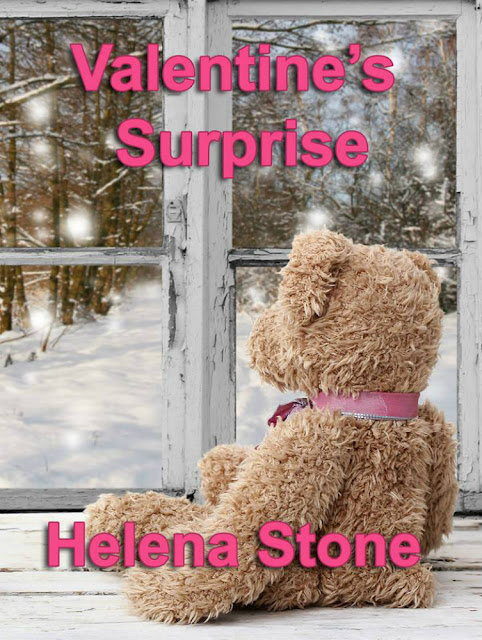 Ben Cronin and Ty O’Malley have been inseparable ever since they got together on Valentine’s Day. Nine months into their relationship, dark clouds descend when Ben’s father falls seriously ill and dies in a matter of weeks. Having lost his only close relative, Ben is grief-stricken, and appears to be sinking ever deeper into a black hole.

Desperate to help Ben cope with his pain, Ty plans a getaway for them, to coincide with their first anniversary. But taking Ben back to the stunning beauty of the Swiss Alps, a place he visited with his father years ago, is a risky undertaking. Reuniting him with memories could as easily push Ben deeper into his pain as it might help him find the first traces of light.

Ty’s plan will either bring them closer than they’ve ever been, or spell disaster— for both of them.

I opened my eyes and instantly squeezed them closed again as a bright light blinded me. I placed my arm over my eyes and turned onto my side, trying to put my back between the disturbing brightness and my face.

I carefully squinted through one half-opened eye at Ty, who also lay on his side, his head resting on his arm and his beautiful eyes fixed on me.

“A bit too bright for my liking,” I grumbled. “Especially this early in the morning.”

Ty laughed. “I hate to disillusion you, but the morning has come and gone.”

“What?” I wasn’t awake enough to figure out what he meant.

Leaning forward, he kissed me. “It’s quarter to one, Ben. We slept the morning away.” His lips found mine again. “It’s hardly surprising since it was after three last night when we actually got here, but unless we’re going to spend the whole day in bed, we should probably get up.”

I opened my mouth to tell Ty that staying in bed all day, with him, didn’t seem like a hardship to me when I remembered exactly where we were. Pushing away the covers, I sat up and turned toward the light source that had disturbed me moments earlier. It turned out to be a large floor-to-ceiling window with a door leading onto a balcony. Without thinking about it I got up, approached the door, opened it, and stepped outside.

“Fuck, it’s cold.” I jumped back into the room a mere second after my bare feet touched the snow.

Ty, who had apparently also left our very comfortable bed, sniggered behind me. “I would have thought the white stuff might have warned you.”

“Yeah, yeah. Very funny.” I bent down and snatched a handful of snow before closing the door and turning to Ty.

“Oh, no, you don’t.” He took a step back, but wasn’t fast enough to stop me from grabbing his upper arm, pulling him close and rubbing the already melting snow over his exposed chest. His squeal when the icy substance connected with his nipple was adorable. The thoughts entering my head when it pebbled under my thumb, had little to do with his cute exclamation. Pressing into him, I pushed him backwards until his calves hit the bed. One more firm push and he lay sprawled out in front of me, a red hue to his chest and his boxer shorts tenting.

With a growl, I dropped forward, making sure to hold my descent with my hands before I crashed into him. Heat, need, and a sense of coming home rushed through me as our bodies fully connected. It had been months since I’d experienced this exhilarating connection. Love burned in my heart, my body yearned for his touch, and my hands itched to reacquaint themselves with every inch of his glorious body.

Capturing his mouth, I pushed my tongue between his lips, demanding entrance. For a few short moments, he went along, our tongues alternately caressing and attacking. Then he turned his head. “Shouldn’t we shower first, brush our teeth? It’s been more than twenty-four hours.”

“Don’t care. If we’re both disgusting, we probably won’t notice.” I trailed kisses, licks, and nips from his ear to his mouth, determined not to be denied.

Ty gave up the fight, shaking his head at my insistence while the smile tugging at the lips I wanted to devour and the delight shining from his eyes, told me that he didn’t mind at all.

“Welcome back,” he whispered against my lips before we lost ourselves in a long, sensuous kiss.

Moments later both of us had somehow lost our underwear. His hard cock rested on his belly, mine right beside it. As I rutted into him, our combined pre-cum made the movements slicker and more carnal with each push.

Gliding against him, feeling, seeing, and hearing Ty’s arousal, falling into the depths of his gorgeous eyes woke something up, deep inside me. A door that had been pulled shut and locked when my dad lost his fight, and had refused to budge in the subsequent weeks, now opened a crack, showing me there might be a way back for me after all.

Ty bucked up against me, adding an extra spark to the heat building between us. I wasn’t going to last long, and judging by the sounds falling from his lips, neither was Ty.

“Together,” he breathed against my lips.

“Almost.” I only just got the word out, too far gone to articulate.

Then I was there. My body stiffened before the release coursed through me. “Ty!” For a moment my mind went blank. My body was the whole universe, with a supernova shining bright in its centre, bringing light to where previously only darkness existed. Ty followed me a moment later, hanging on to me for dear life as his release mingled with mine on our bellies. 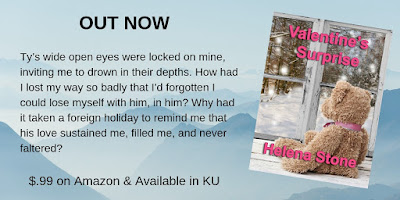 And, just in case you haven’t read Valentine’s love yet, here are all the details: