Clearly, it is either a feast or a famine when it comes to my book releases and we've entered a festive part of my writing career. 😉

Just over a month after announcing the release of Picture Perfect, I'm delighted to introduce you to Drawing Forever. 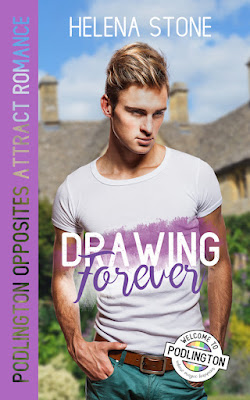 I’m hiding from the past, he’s looking for a future. Could it be with me?

Two years ago, Rob Master fled his old life and started from scratch in Podlington, determined not to repeat past mistakes. People can’t hurt him with facts they don’t know, so he keeps his attraction to men and his love of drawing a closely guarded secret. People see him as the stand-offish barman in The Miracle of Magic, and that suits him just fine.

After years as a successful model in the glamour industry in America, Darren Grant is more than ready for a change. The problem is that he has no qualifications. An extended holiday to Podlington in England might just bring him the clarity to figure out a way forward.

Rob is shy and withdrawn, Darren outgoing and edgy. Despite the differences, the attraction between them is undeniable. But even after Darren volunteers to help with the organisation of the Podlington Art Fest, there’s an end date to his stay in England. Are Rob’s first chance at love and Darren’s hopes for a new future doomed, or will Podlington provide the miracle they need to draw a future...together?

Welcome to Podlington! The fictional English village where magic happens and dreams come true. This LGBTQ+ opposites attract story is part of the Podlington Village Romance series and can be read as a standalone novel. Drawing Forever features a shy barman, an outgoing glamour model, numerous pillows and cushions, a dash of serendipity, and a guaranteed happy ending.

Darren returned to his room in Podlington House hours later. Eli and Cameron had been wonderful hosts, and the Indian restaurant where they’d treated him to dinner had been amazing. Darren had been cynical when he’d seen that the place claimed to blend influences from across the Indian continent to come up with unique recipes, convinced all eateries made the same claim. But he’d been very pleasantly surprised and had to admit he’d never tasted anything quite like the dishes they’d served and certainly nothing better.

As he looked at his inviting bed, exhaustion washed over him. Between jet lag and trying to stop Eli and Cameron from delving into his reasons for coming to England, Darren’s mind and body were ready to give up.

He took a few minutes to transfer several of the pillows from the couch and chairs to his large double bed, where he created a nest. With a sigh, he sank into the soft cocoon, closed his eyes, and drifted off into a dream about a young man with thick black hair and a scowl distorting his pretty face.

You may have noticed that Picture Perfect was #1 in the series and Drawing Forever is book #7. No, I didn't forget to announce the release of five other titles. The reason I haven't posted about those other books is that they weren't written by me.

As I mentioned before, the Podlington Village Romance series is the result of a partnership between Alex Jane, Helen J. Perry, Riza Curtis, and me. And this is what the four Season II books look like together:

All eight Podlington titles are available to be read in Kindle Unlimited and can be found here: