Monday Flash Fics: The Chosen One 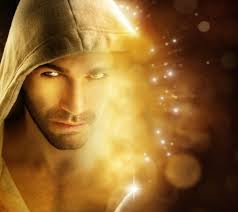 Kell took a deep breath and swallowed before opening his mouth to respond. Forty-eight hours of not talking to anyone had left his mouth dry and him tongue tied. “Yeah, as ready as I’ll ever be, I guess.”

“I don’t know what you’re so worried about. It’s a simple test. All firstborns in our line have to face it. You know this.” His mother sounded exasperated.

He forced a smile on his face and got up from the floor where he’d been sitting. Stretching his limps to get the kinks out he bought himself a few more precious seconds. What if it happened? What if it didn’t?

His mother handed Kell the hooded cloak and he put it on over his naked body. He should have spent the past two days meditating, preparing his mind, body and soul for the revelations he might be facing. Instead he’d worried about the future and dreamed about Mascha.

Mascha. He only just repressed the sigh wanting to escape him. They’d known better. Both he and Mascha had known what lay ahead and that they might not have a future together. They’d tried to fight the feelings but the connection between them had been too strong. They’d talked about it and had come up with all sorts of justifications for their continued intimacy.

“Surely we wouldn’t feel drawn to each other as strongly as we do if it wasn’t meant to be,” Mascha had argued. And in the heated moment Kell hadn’t been able or willing to come up with a counter argument. But now their time was up. Not they but the Universe determined who Kell would spend his life with. As the future leader of his people he had to submit to the vagaries of faith and accept whoever his chosen partner might be.

The silence felt oppressive when Kell followed his mother to the rock throne in the centre of the village green. The hood pulled over his head prevented Kell from seeing anything unless it was straight ahead of him. He knew Mascha was somewhere in the crowd, he could feel his lover’s presence but he knew better than to look. If Mascha wasn’t his chosen one, their past relationship, if revealed, would mean death to the man Kell loved.

Kell sat down on the hard surface of the throne and send a silent plea up to the stars. One by one every villager between the age of seventeen and twenty-five walked to the throne, stopped, waited and moved on again. Forty-five years had passed since the last time this ceremony took place and Kell’s mothers had found each other and few remembered what the moment of revelation looked like.

They were nearing the end of the line and Kell wondered what would happen if nobody was chosen. Would he then be allowed to pick for himself? Kell lowered his gaze as hope blossomed in his chest and grew and grew, until it didn’t feel like hope anymore but something he’d never felt before. He’d never known you could feel life rushing through your veins but he did. A throbbing he’d only ever felt in his balls just before ejaculating buzzed through his whole body.

Kell was vaguely aware of the exited gasps around him before he looked up and saw himself reflected in the deep green and very familiar eyes staring at him. He saw the reflection of the sparkling stars surrounding his face and could have wept. The choice had been made, Kell’s position in the Universe confirmed and he’d embrace his future with open arms...as soon as he’d finished embracing his chosen mate, Mascha.

As always more pictures inspired by the same image can be found in the Monday Flash Fics group on Facebook. And talking about the group, why don’t you join us? Either to suggest images or to write a flash of your own when a picture inspires you. We’re an easy going bunch, not too strict when it comes to word counts (after all, this flash of mine was over by 110 words J) and we don’t expect anybody to join in every week.
Posted by Helena Stone at 11:30