Monday Flash Fics: Back from the Dead 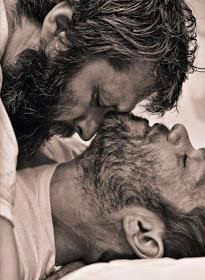 Back from the Dead

‘Name?” I stare at the man behind the desk, wondering why I think I know him.

He stares at me for a moment before asking, in a much softer voice, “date of birth?”

He lifts his hands from the keyboard and gazes at me, his eyes wide. “You…that….I thought you were dead.”

The moment he says the words I realise I do know him—Stanley Tormey. And just like him, I was told he’d died.

“I’ll be finished for the day in fifteen minutes, can you wait?” The choked quality to his voice matches the feelings rushing through me and I nod, unable to trust my voice. Memories assault me as I lean against a wall and watch him deal with other applicants.

At eighteen, both of us still believed everything was possible. We had no doubt love would be enough even if the rest of the world frowned upon our feelings and despised us for refusing to hide them. The foolish pride of youth saw us through nine months of sheer bliss. We had it all figured out. We would finish school and leave our small town behind to make our future in what we expected to be a more tolerant wider world.

Even now, all these years later, I remember those months in vivid detail. The electricity between us when we first looked each other in the eye, the delightful shock of that first kiss, exploring his body—so much like mine and yet so different.

Our happiness was all consuming, our innocence both a blessing and a curse. Would we have acted differently if we’d known what was to come? I doubt it. Together and in love we felt invincible, until reality showed us we were anything but.

I still can’t remember the details of that night. When I woke up in a hospital bed, my parents told me Stan and I had been attacked, viciously beaten and left for dead. They didn’t commiserate when I shed hours worth of tears at the news that Stan hadn’t survived. By the time I had finished the rehabilitation programme, my family had moved to the other side of the country.

Maybe I should have known when they refused to bring me to Stan’s grave, but my head didn’t work any better than my body and I allowed them to organise my life while I remained numb and withdrawn—battling against the voices in my head telling me I should have died instead of Stan, or at least with him.

“What about your life now?” I ask after Stan has told me his story which is almost a carbon copy of mine. We’re in my apartment, lying beside each other on my bed as if we’re not strong enough to stand or sit.

He shakes his head. “I tried. I’ve been in a few relationships but none of them lasted. It never felt right.” He turns onto his back and stares at the ceiling. Unable to resist and because my life has followed the same path as his, ever since that faithful day, I push myself up and drape myself over his body.

“I know,” I whisper. “None of it felt right because none of them were you.”

I close my eyes and rest my forehead against his chin, back where I belong at last.

As always more stories based on the same image can be found in the Monday Flash Fics Group on Facebook.
Posted by Helena Stone at 09:30