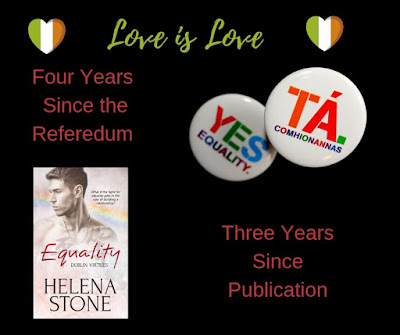 Almost exactly four years ago, Ireland voted in favour of marriage equality during a referendum, making us the first and so far only country to introduce this right through a popular vote. As you can probably imagine, I was very invested in both the campaign leading up to the referendum and in the eventual result. I remember working in the library the day the votes were being counted and spending most of my time staring at my twitter account as the results from the various counties were announced.

Counting the votes always takes at least a day in Ireland and I was home again by the time the national result was officially announced. Although by that stage it had been clear for some time that the YES-vote had won the day, I still released a huge sigh of relief (and shed more than a few tears) when the official declaration was made.

The referendum and the months leading up to it made such an impression on me that I had to put it in a book. The result was Equality, the second book in my Dublin Virtues trilogy which was released on the first anniversary of the referendum. To this day it ranks very high on my list of favourites.

In the following scene we are getting close to March 22nd, the day the referendum is to take place, and Lorcan and Eric have joined the Yes campaign in Lorcan’s hometown, where he’s expected to make a speech.

After over an hour of listening to all the reasons people should vote No, Eric wanted to scream. They were the same claims he heard on radio and television every day, and they didn’t get any less ridiculous just because people kept repeating them.

“Thank you, ladies and gentlemen. You’ve now heard the arguments from those who oppose the suggestion made in the referendum. For the sake of objectivity, we decided it’s only fair to also invite someone from the Yes campaign to state their case.” The man on stage nodded at Lorcan, who appeared to stiffen more, if such a thing were possible, before getting up and slowly approaching the speaking platform. Eric’s heartbeat increased as he worried about the man he loved, and he said a silent prayer to the God he didn’t believe in, for the words to flow and the audience not to be too hostile. He held his breath as he waited for Lorcan to start.

“Thank you for allowing me to say a few words.”

Eric released the air he’d been holding as he stared at his boyfriend—if that was still true—and recognized the nervous tension on his face. Lorcan moved his head as if he wanted to memorize the faces of everybody in the hall for future reference and yet, Eric was sure he didn’t see anybody.

“I realize this isn’t a comfortable subject for most of you. Trust me, it isn’t easy for me, either. It never was.” Lorcan paused, as if he wasn’t sure how to go on, and for a moment Eric was convinced he was about to step away from the microphone and sit down again. Eric imagined he could hear Lorcan’s deep sigh before he continued. “You’re being asked to vote in favor of something you’ve always been told is wrong. Most of you are certain people like me are an abomination in the eyes of God.”

“But don’t you feel that thinking along those lines amounts to accusing God of making countless mistakes? God, we’ve been told, is almighty. God is infallible. If that is true, then why are gay children being born every day? Because believe me when I say that none of us woke up one morning and decided to be gay out of spite, or out of some deep-rooted desire to be different. Far from it. When I first realized I was attracted to men, I hated myself. I didn’t want to be the odd one out. All I desired was to be the same as everybody else—to fit in. And I don’t. I can’t begin to explain how much it hurts when you’re being treated as different, less than others, just because you were born a certain way.”

Lorcan paused again and Eric braced himself, convinced someone in the audience would start heckling any moment, but silence reigned supreme. Eric didn’t think it would have been his approach, but maybe honest and vulnerable was the way to win over the crowd.

“We’re not asking for special treatment. All we want is to be treated the same way as you. This vote isn’t about whether or not you understand or approve of homosexuality. It has nothing to do with raising and adopting children. All a Yes vote would ensure is that we will be a little bit less separate from the rest of society. We just want to be equal. Nothing is going to change for you. Your marriages will still be as good or as bad as they are right now—your weddings still as lavish or as simple as you want them to be. Voting Yes won’t cost you anything and will give so very much.”

Lorcan looked up and his gaze sought Eric’s before he bowed his head and took a small step backward.

“But what about the children!” an angry voice shouted from somewhere in the back of the hall.

Eric turned to see who had spoken but was too late. When he focused on Lorcan again the man had gone through a transformation. The hesitation was gone, and no sign of shyness or awkwardness remained as Lorcan all but glared at the crowd.

“Yes! The children. Let’s talk about them. Like I said, this referendum isn’t about whether or not a gay couple should be able to adopt a child. Children are already being raised by same-sex couples and legislation to facilitate that is separate from the marriage issue. But, if you are so worried about the children and their feelings, how can you possibly stand by while people proclaim, day after day, that the only way a child should be raised is by a heterosexual couple? How do you imagine that makes children who are now growing up with gay parents, or are being brought up by single parents, feel? Do you seriously believe it’s a good idea to tell all those children they’re just not good enough? Because that’s what you’re doing. Just as you’re telling every child who is questioning their sexuality right now, and trying to come to terms with the fact that they don’t fit what society has decided is the norm, that they’re inferior. Don’t tell me you’re worried about the children if you’re prepared to hurt so many of them just to win your argument. Don’t be a hypocrite. This has nothing to do with the children and everything to do with your prejudices.”

Hesitant clapping started on Eric’s right and within moments others joined in. Eric’s heart swelled as he watched Lorcan fully relax for the first time in four days. He had no doubt Lorcan knew as well as he did that he wouldn’t have convinced everyone. But, by the sound of it, he’d managed to make at least a few people think. 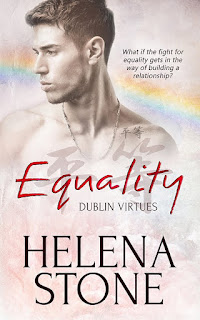 Love is love. But what if the fight for equality gets in the way of building a relationship?
Lorcan Barrett has never considered himself relationship material. After his parents made it perfectly clear they’d never welcome a partner of his into their home, he learned to love his own company and now can’t imagine sharing his life with another. After a single passionate kiss with Eric Kavanagh—the night before he travels to Canada for three months—Lorcan’s no longer sure he wants to be on his own. The problem is, he has no idea what sharing his life with someone else might entail.
Eric Kavanagh grew up in a loving and supportive family and had always assumed he’d end up in a committed relationship. Sure that he’s found the one, Eric doesn’t worry about the fact that Lorcan has no experience when it comes to love and relationships. They are good together, so what could possibly go wrong?
When both men get involved in the marriage equality referendum in Ireland, it appears to bring them even closer together, until Lorcan’s insecurities get the upper hand and he shuts Eric out. Will the fight for a Yes vote cost them their relationship, or will they be able to find a balance between the love they share and the need for equality?
mybook.to/VirtueEquality