Flashback to Lessons in Love 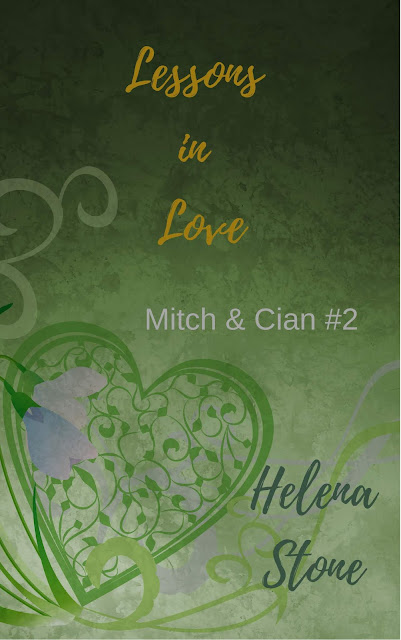 I hope you're enjoying my weekly teasers because there are still a few to come.

This week it is the turn of Lessons in Love, the second story featuring Mitch and Cian.

Mitch has turned eighteen since he met Cian in A Miracle in the Library, and has travelled to Dublin to spend the long St. Patrick's Day weekend with Cian...on their own...without parental supervision.

Unsurprisingly, this means our two young lovers take their relationship beyond the kisses they've so far enjoyed. But with Cian not being a whole lot more experienced than Mitch, there's a fair amount of worry and second-guessing involved.

When he’d run out of reasons to be in the bathroom, Cian slowly made his way back to his room, taking a deep breath before opening the door, only to release it on a loud puff.

Obviously, Mitch didn’t share his concerns, considering he’d found his way into the bed and under the covers with only his head and shoulders—his naked shoulders—visible. The light mounted on the wall behind the bed spread a soft glow over his mop of black hair.

A quick glance around the room showed Cian the pile of clothes Mitch had left on the floor under the curtained window. As far as he could tell, the collection did not include any underwear.
Without looking at Mitch but fully aware of his gaze locked on his body, Cian made quick work of stripping and adding his jeans and top to Mitch’s clothes.

The first thing he noticed when he slipped underneath the covers was that for once they weren’t chilly. Mitch’s body heat had created a nice warm nest for him to crawl into. The second thing was Mitch’s naked thigh pressing against his. He shifted, breaking the contact between them before it could freak Mitch out.

He wished he could have practiced for this night, that there was a scenario he could follow. He knew he should just open his mouth and talk to Mitch, find out what, if any, concerns he had. But he couldn’t for the life of him figure out how to phrase the question without it sounding as if he was asking Mitch how far he was willing to go.

He stiffened when Mitch’s leg connected with his again, but decided to ignore it. With the bed being as small as it was, contact would be unavoidable, and making an issue out of every time it happened would only make the situation worse, not better.

The mattress dipped as Mitch turned. When he placed a hand on Cian’s exposed neck, his breathing hitched.

“Is this okay?” Mitch’s question indicated that Cian’s discomfort hadn’t escaped him.

Cian turned on his side and faced Mitch, shocked to find his boyfriend’s face only inches from his. “Yes, if it’s okay for you, it’s okay for me.”

A small smile played on Mitch’s lips. “You realize I have no idea what I’m doing, right?”

Cian returned the smile, grateful that Mitch had found the courage he lacked. “I haven’t got much more of an idea, to be honest.”

Mitch gazed at him, his brown eyes even darker in the dim light. “Well,” he said, “I know we’re both okay with this.” He drew closer and pressed his lips against Cian’s.

The connection, the soft glide of Mitch’s tongue across his lips, was all Cian needed to chase away his worries. Mitch was right. They both knew how to do this…very well. They’d figure the rest of it out as they went, together. Then those thoughts faded too as he deepened the kiss and lost himself in the smell, taste, and feel of Mitch.

When he could think again, Cian noticed they had somehow ended up pressed together, most of their upper bodies touching too. As a result, there was no way he could fail to notice Mitch’s stiff cock pressing against his thigh, mere inches away from his own equally hard dick.

As their kisses got ever more heated and demanding, Mitch moved against Cian’s body, obviously seeking more pleasure. As tempting as it was to touch Mitch’s dick, Cian resisted and limited himself to stroking his boyfriend’s shoulder and chest. His heart sang when Mitch copied his caresses, while Cian’s cock went from hard to bordering on uncomfortable.

It wasn’t long before the combination of Mitch’s touch, kisses, and still covered dick rubbing against his leg became too much, and Cian lowered his free hand and squeezed his own cock. A slight shift in the bed told him Mitch had copied this action too.

Lust took over, pushing any and all concerns Cian had harbored into the back of his mind. He pushed the duvet to the end of the bed and freed his straining penis from his suddenly very tight boxer briefs, stroking himself slowly without ever pulling out of their endless kiss.

Hmmmm. Mitch hummed against Cian’s lips as they both tugged at their dicks.

“Wanna see.” As much as he hated ending their lip-lock, Cian couldn’t resist his longing to see Mitch in all his naked glory. Without interrupting his wank, he raised himself up a little and allowed his gaze to travel across Mitch’s naked body. Christ, but he’s gorgeous.

His body, stretched out on the bed, was lean but not skinny. The muscles in his legs and arms were easily visible without being clearly defined. As for his cock…. Cian swallowed hard as his gaze locked on the long, erect, and “heavier than he would have expected” dick and Mitch’s hand gliding over it, pushing the skin up and down while soft, needy sounds fell from his lips.

Cian wasn’t sure why this felt much more intimate than the few hand and blow jobs he’d given and received in the past. All he knew was that the combination of watching Mitch as he pleasured himself and his own hand on his ready-to-explode dick drove him to his climax with shocking speed.

It was all Cian needed to push him over the edge too. His orgasm roared through his body, forcing his eyes shut as he surrendered to the previously unknown pleasure of coming together with someone he cared for.

Please check back next week for a new excerpt.